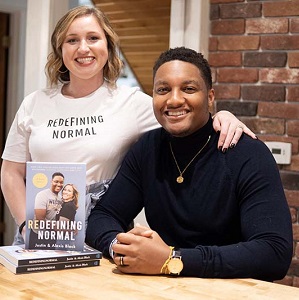 This week’s episode is about self-publishing, which we’ve covered before. But this week’s guests have turned the success of their book into a full-time business that’s still growing in momentum.

Redefining Normal currently has over 200 reviews on Amazon and has sold more than 9,000 copies in the two years since it was published.

That’s an accomplishment in itself for a memoir. (Normally, unless you’re already famous, nobody’s buying your memoir!)

In addition to book sales, Justin and Alexis are also doing workshops, keynote speeches, and other paid gigs related to the content of their book.

In this episode we dive into everything Justin and Alexis did to set the book up for success, and how you can borrow the same tactics for your own side hustle.

Justin joined me on The Side Hustle Show interview to share:

There’s a LOT that goes into turning a book idea into a successful product. Don’t go into it blind.

The Inspiration to Write Redefining Normal

“The reason why we wanted to write this book was largely because myself and my wife had lived with the experience of trauma going down generations in our family, and we’ve also lived the experience in foster care,” Justin told me.

Justin explained that he and his wife, Alexis, wanted to write a book about their own personal stories growing up and how their paths crossed.

In the book, they share their family histories and how their own paths merged when they found each other, and how it’s impacted their lives.

But more than that, Justin told me they wrote the book to help challenge readers to question their own lives and what they want from their parental relationships.

Justin explained that their book makes readers ask themselves:

Writing a Book and Hiring Help

“One of the biggest things that helped us organize the writing of the book itself was The Self-Publishing School created by Chandler Bolt,” Justin told me.

Justin said The Self Publishing School course took himself and Alexis through the process of how to gather their thoughts, outline their book, and start writing it.

Something else Justin said helped the whole process of writing a book was surrounding himself with the right people.

He was careful about who he told he was writing a book, as well as who he listened to for advice.

Once he had his first draft, Justin said he showed it to people with writing experience to get their professional opinion on how the book was shaping up.

Justin and Alexis spent most of their time and money on a content editor. It was the content editor’s job to make sure the story made sense and read well, which is important to the end reader.

They also paid English teachers to go over the grammar and help edit the final copy. Justin said they ended up having about 7-8 different editors go over the book to get it to where he and Alexis were happy with it.

Even so, Justin told me, “We weren’t set on everything being perfect before we actually published. We knew there would be mistakes, some grammar errors throughout the book.”

As they were publishing their book through Amazon’s Print on Demand service, Justin knew he could make changes down the road and re-upload the book.

Justin and Alexis used a company called 100covers.com to design their cover. 100Covers is an online platform where a team of designers all produce a cover based on your specs, and you get to choose which cover you like best.

They ended up using their engagement photo for the cover, which Justin said wasn’t the original plan.

After bouncing multiple ideas with their launch team and having people vote on which cover ideas they liked best, they ended up with their engagement photo and blue background.

Justin and Alexis built a launch team who were instrumental in helping with everything from tweaking the cover, coming up with a title, and of course, launching the book.

Justin said he reached out to people he’d known personally and professionally for a number of years and asked if they wanted to be involved.

It was a benefit being in the college environment, Justin and Alexis knew a number of academics and people with experience editing and publishing books.

Justin kept the launch team heavily involved in the whole process. From sending small snippets of the book to his ideas for the title, he was constantly bouncing ideas off of them.

Justin said he and Alexis created a Facebook group with their launch team for ease of communication and also had them in an email loop.

Here they would share quizzes and questionnaires, and could easily pick up feedback and bounce ideas around. By launch date, there were around 300 people on the team!

“Giving people a view into the process makes them feel important… they feel such a part of it and close to it,” Justin explained.

Launching a Book and Pricing Strategy

Leading up to the launch, Justin said he built anticipation among his launch team by counting down the days till launch and making the book available to pre-order a week before launch.

For pricing, Justin decided to launch the book at $0.99 on day one to help get some initial traction.

Knowing reviews were important for Amazon’s algorithm, Justin tried to get everyone who read the book to leave a review.

One of the incentives Justin ran was a raffle. Everyone who left a review within a certain amount of time was entered into a raffle to win a gift card.

Justin also helped out his review team by outlining how to write a review and some of the points they might want to include.

This helped out some of the people who read his book but wouldn’t usually write a review because they were not sure how to or what to write.

One of the most important things that helped market Redefining Normal was, “knowing who were serving,” Justin told me.

This is something Justin said he learned from Self Publishing School. In the course, Self-Publishing School teaches students to know their market, know who they want to serve, and how to get into those circles.

Justin said he broke down his book into different themes, such as child welfare, spiritual faith, mental health, and so on.

He and Alexis then immersed themselves in those different environments.

For example, they would go to separate conferences for mental health and child welfare, Christian music festivals, and other events to promote their book.

This was an effective marketing strategy to reach a much wider audience, while still selling the book to people who would benefit from it.

To introduce themselves to the organizers of these events, Justin said he and Alexis created a media kit.

Inside their media kit, they included bios about themselves, their professional experience, and would breakdown everything they would cover given the chance to speak.

Collecting Emails With a Lead Magnet

As a way to collect emails, Justin and Alexis have included a lead magnet near the beginning of their book.

Their lead magnet is a PDF titled “How Healthy Is Your Relationship?” It’s a checklist people can run through to get an idea of how healthy their relationships are.

Instead of putting a link for someone to click, however, Justin asks readers to email him directly including the words “FREE GIFT” in the title of the email.

Justin said he did this because he wanted to give readers action steps to follow so they feel included in the process.

Someone on his team has to manually respond when someone asks for the checklist, and they then use MailerLite to manage their email list.

Justin said he also has a lead magnet popup on their website and they also collect emails in person at events.

Justin explained that he and Alexis have been able to take themes and conversations from their book and turn them into workshops and keynote talks.

Justin said there is a lot of demand from social workers and other professionals in the child welfare space looking for examples and advice from people in their position.

Through their workshops and keynote talks, Justin and Alexis have been able to take professionals from various industries through the steps they personally went through.

Justin and Alexis have been delivering these workshops and speeches both in person and virtually. For a 1-hour keynote speech, Justin said they’re charging around $8,500.

Surprises Along the Way

Justin told me he’s surprised that writing the book has turned into a full-time business for himself and Alexis.

They didn’t set out to write the book as a way to start a business.

But more than that, Justin said he’s been really surprised by some of the testimonials and feedback they’ve received about their book.

“I’ve heard people say, ‘this is surprisingly beautiful,’” and “You’ve encouraged me to go back and get my doctorate,” Justin told me.

Looking forward, Justin and Alexis’ lives are only getting busier.

They have a child on the way, they released a faith-based companion guide in July 2022, and they’re releasing their first children’s book coming up this fall.

Justin said they are also expanding their team so they’re able to put on more workshops around the country.

Justin’s #1 Tip for Side Hustle Nation

“See how you can serve.”

There’s a LOT that goes into turning a book idea into a successful product. Don’t go into it blind.

Links and Resources from this Episode

Looking for More Side Hustle Help?

The award-winning Side Hustle Show is a
Top 10 Entrepreneurship podcast
with over 1,000 5-star ratings!

Listen in your favorite podcast app or directly in your browser.

Article Marketing And SEO Tips For Your Online Business